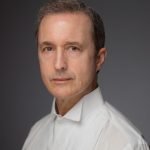 David Mitchum Brown has been acting and dancing since he was eleven and enjoyed a career in production shows before taking an extended hiatus for college and parenthood. Since returning to acting a few years ago, he’s appeared in dozens of stage and screen productions, including as Joe Keller in ​All My Sons​, in the title role for ​Uncle Vanya,​ as Gov. Jack Slaton

in ​Parade​, as program host Clifton Feddington in ​The 1940s Radio Hour​, as Clarence Day in ​Life With Father,​ and as Pres. Franklin Roosevelt in the Italian feature film ​In Guerra per Amore​ (At War for Love).​ ​David is honored to work with Sarah Andrews again and grateful for the opportunity to tell this fascinating story with these wonderful actors.