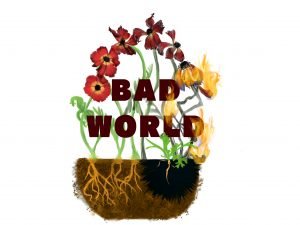 In light of the Omicron chaos, Crave Theatre Company has extended our deadline for video audition submissions. We are accepting video auditions from singers/performers for two roles in our new musical BAD WORLD from now until 11:59pm on Monday, January 31st, 2022.

Please note that these are open auditions. While these characters were originally written for female-identifying persons, we are willing to adjust lyrics/vocal parts to fit the right performer. All gender identities, races/ethnicities are welcome to audition. Due to the subject matter, we are requiring that all performers be over 18 years of age.

ZARIA/ATTACKER 2: Bold. Punk. Fiercely protective. Snarky but empathetic. Zaria is the head of the survivor support group. After growing up in Alaska, Zaria moved south to work as a seasonal farm worker with the dream of saving enough money to start a band. After being attacked by a supervisor, Zaria pushed for justice. This role also voices Attacker 2, an older French man, in the flashback sequences. Some French language (or a willingness & ability to learn) desired. Current vocal part: Mezzo-Soprano with a belt.

LINNEA/ATTACKER 1: Social shapeshifter. Third-culture kid. Queer-identifying. Linnea is on a journey of self-discovery. Linnea was attacked by someone they were close to. In the flashback sequences, this role also voices Attacker 1, a young, brazen French man. French language (or the willingness & ability to learn) required for Attacker 1. Current vocal part: primarily Soprano, with some Mezzo/belt required, especially as Attacker 1.

Both of these characters vocally embody the two attacker characters in flashback sequences of the show. This may also require physical embodiment of the attackers in the form of stylized choreography; this depends on the developing vision of the co-directors and the comfort level of the performers. No assault sequence will be overt, and an intimacy coach may be brought in to help ensure all performers are cared for. We will prioritize your well being.

The roles of ROSE and LANGSTON have already been cast.

Bad World is based on a true story of a survivor’s journey dealing with sexual assault. The show focuses on the character Rose, who was sexually assaulted while studying abroad. Her story is interwoven with those of three other survivors in a support group, whose rich backstories help to give light to the range of experiences and reactions to trauma. Structurally, we play with the fluidity of time, utilizing flashbacks and flash-forwards to emphasize the influence of memory when coping with trauma. Stylistically, we feature musical theatre, jazz, folk, contemporary, and choral genres in the composition.

Ultimately, Bad World strives to de-stigmatize survivors of sexual assault and show that through shared vulnerability, can come strength.

Bad World began as a one-woman musical and over time, grew into a four-person ensemble piece.

Kylie Jenifer Rose and James Liptak began songwriting for Bad World in 2018, and were joined by co-lyricist Jennifer Provenza. The songs range from musical theatre, to jazz, folk, and rock genres.

A music-focused workshop was held for the one-woman version of the show as part of a residency at Shaking the Tree Theater in March 2019. The creative team used audience feedback from that workshop to make clarifying revisions.

In the spring of 2019, Rachael Singer-Brown joined as director to help shape and develop the show.

A second workshop of the show was held in January 2020 and the creative team decided to expand the Bad World story to include a wider range of experiences. At that time, Michael Cavazos joined Rachael as the co-director (after previously supporting the show as a stage manager).

Auditions were held, and roles were cast in February 2020. Then the pandemic happened! The creative team decided to use this time to make major rewrites and prepare to record a concept album.

The cast recording that was produced in early 2021, and can be listened to here: https://open.spotify.com/album/3fgxDaxfEZilNUyLkqNULK?si=DcsRPJehQPWEB9YuCsWCcQ

Auditions will be held virtually: digital submissions accepted through January 23, 2022.

Please film yourself performing two contrasting 16-bar cuts of contemporary songs; one should demonstrate your ability to belt. Email cravetheatrecompany@gmail.com with a headshot, resume, and a link to your audition video.

We’ll be in touch about callbacks no later than January 30th, 2022

Do feel free to reach out to us with any questions at cravetheatrecompany@gmail.com.