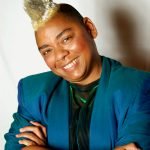 Zeloszelos Marchandt has been called a tapestry of an individual. An interdisciplinary artist, public speaker and journalist (originally from Nashville, TN) based in the NW from a wee age, his writings, vocals, circus theater, drag and visual art have taken him coast to coast and abroad. His repertoire and interests cover a diverse scope that involves strong classical fundamentals with a healthy departure from tradition, in favor of techniques geared towards adaptation. Previous appearances have been with The Portland Opera, Opera Theater Oregon, Caravan Productions, Wanderlust Circus, Sky Circus, Sir Cupcakes Queer Circus, Festival of the French Wood’s Circus and Broadway program, The Umbrella Festival, Boyuerism, Carvan of Glam and many more. He works globally as a voice expression, singing and theater instructor focusing on the transgender, queer, gender expansive and gender non-conforming community.