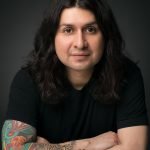 Michael Cavazos is a Queer Chicano theatre maker and visual artist. He received his BFA in Theatre from Emerson College and his MA in Media Studies from The New School. Michael is the author of the play Gritos y Chismesitos and co-author of Chic and Sassy and Chic and Sassy: The Higher the Hair, the Closer to God. He is a founding member of the all-drag sketch comedy troupe Gender Offenders, performing under the name of Chic Ana. Their work is featured in the documentary, History in the Making: A Grassroots Fight for Marriage Equality and in the book, The People’s Victory (2017). He performed on many New York stages, including The Duplex Cabaret, Nuyorican Poets Café, D-Lounge at the Daryl Roth Theatre, Beechman Theatre, Cherry Lane Theatre, La Mama, The Culture Project, and PS 122. In Portland, Michael directed and performed in the theatrical concert, Universo, for Hand2Mouth and has worked with Imago, Milagro, Crave, Profile and Portland Center Stage. Michael is currently co-directing the new musical Bad World with Crave Theatre. A company member at Hand2Mouth, he is on the devising team for a new work called This Town and also part of two cross-cultural theatre collaborations with companies in Egypt and France. Michael’s art was recently selected as part of RACC’s new public art collection: Capturing the Moment. www.michaelandthecity.com