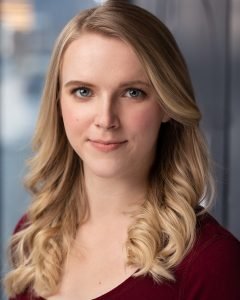 Kylie Jenifer Rose is an actor, singer/songwriter, and dialect coach whose soul is drawn to the creation and development of new works. You may recognize Kylie from her Portland performances as Ken in Crave Theatre’s production of Red, Kelly in the world premiere of Theatre Berk’s From the Ruby Lounge, Lydia in Enso Theater Ensemble’s adaptation of Pride and Prejudice, or as Scheherazade in Twisted: The Untold Story of a Royal Vizier at the Funhouse Lounge. A co-founder and board member for Crave Theatre Company, Kylie is eager to release the cast album of her first co-written musical: Bad World! For more information about Kylie’s performance work, visit her website at: www.kyliejeniferrose.com