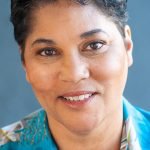 Jennifer Lanier grew up in Greensboro NC and received her classical acting training at the University of North Carolina School of the Arts under Gerald Freedman, Cigden Onat, and Robert Moyer. While in North Carolina, Jennifer founded the Lesbian Thesbians theatre company and produced a number of independent projects. She became a founding fellow of the A+ Schools Program, instructing school faculties in arts integration and curriculum enrichment. She works with Robert Moyer at the United Stage, bringing scripted and improvisational stories to young audiences throughout the South. The two had a run at the Smithsonian Institution’s Discovery Theatre of Lanier’s original young audiences piece, BRER RABBIT MEETS COYOTE, exploring the challenges of growing up as an ethnically mixed person. Lanier expanded the piece into a solo comedy called NONE OF THE ABOVE which she has toured to colleges, theatre festivals, and Pride events throughout the country. She currently has a production company, Many Horses Productions, which produces variety shows, drag events, and theatre.