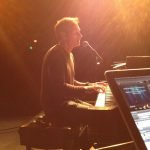 James Liptak is a writer and performer with degrees in Percussion Performance and Electronics. A former music minister and choir director in the Bay Area, he has done session work for several award-winning gospel and rock performers.  Now, in his career’s third act, he performs with comedy and improv groups including Portland Improv All-stars at PCS, Siren Theater, and Funhouse Lounge, producers Die Hard, The Musical Parody and Back To The Future all co-written by James. James is thrilled to be collaborating on the refreshing challenge of tackling a non-comedy. James’ most recent journey in writing is a musical based on children’s book, “Rasmus And The Vagabond” by Astrid Lindgren. He is a co-composer for Bad World.