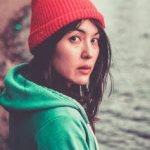 Ashley Mellinger is an award-winning half-Korean actor and producer. After graduating from NYU’s Tisch School of the Arts and working in NYC for a decade, she moved to Portland, Oregon and co-founded Desert Island Studios to increase artists’ accessibility to film resources. Recent acting credits include The Theatre Company’s podcast play Vinegar Tom, and Portland Shakespeare Project’s online workshop of The Winter’s Tale. Pre-pandemic, she was nominated for a Best Actor Drammy for her performance in BLISS (or Emily Post is Dead!) at Defunkt Theatre. Just after the pandemic, she co-wrote and starred in the AAFL 72 Hour Shootout film, Vent (which won 2nd Runner Up, Best Editor, and Best Screenwriter).