Xinnia is a genderfluid, African, drag performer, dancer, and make up artist, originally born in Kenya of the Luo ethnic group. They have experience with many art mediums, but center dance, acting, and non-binary gender performance through their drag persona, Ogre. They explore multiple expressions of gender to create complete drag sets with narratives that are often focused through a lens of queer Afro-indigenous identity. Though currently in the Bay — performing through virtual platforms — the past three years prior to the pandemic they have been featured live in Portland’s variety shows and drag events. They have often performed with D&D productions in Melange: A Queer and POC Variety show, as well as Crown Me, since their debut in the drag scene in 2017. 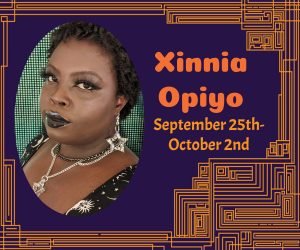