$10 – $25
Join us for Ten, Tiny, Talks Resident Artist Lavanyaa Surendar’s dance piece “Seeking Eternity,” inspired by 9th Century Female Poet “Andal” on SATURDAY, September 17th at 7:30 pm at New Expressive works (810 SE Belmont St, Portland, OR 97214).
Lavanyaa developed “Seeking Eternity” with Rasiga D Prasadh doing the music and Dr. Guru Bharadwaaj recording the audio. Lavanyaa Surendar is the President of Ziksa Inc, a non-profit supporting artists and has worked for years exploring the connection between art and neuroscience. She has worked extensively to help bring the art of dance to Wisconsin to incorporate it in culture, exercise, and expand minds.
Seeking Eternity portrays through dance, the Universe and its transient nature. The Universe is an ever changing dynamic place. It is the time domain that focuses on the evolution of the cosmic objects. We will also be time traveling with the help of literature and we will be talking about stories that happened (as per documentation) in history.
It is influenced by an age old sanskrit literature “Keshadi pada varnanam” – Srimad Narayaneeyam . Lavanyaa found inspiration from the “Bhakthi movement” that took place between the 12th and the 17th century. The movement has many core principles like God is one, To worship God one should serve humanity, All Men /women / living beings are equal. Whether embarking on this journey as a literary masterpiece or to answer our spiritual questions, introspection plays a significant role. The work is based on a medieval Sanskrit text, comprising a summary study in poetic form and seeks to bring this age-old language into the limelight. 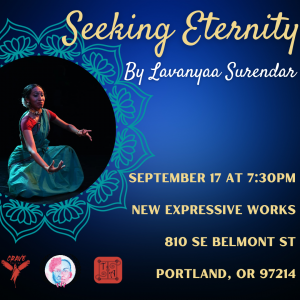