I Turned It Over

Our performance series launches with the premiere of I Turned It Over, a thirty minute one-act brought to life by Zeloszelos Marchandt and Resident Artist Mx. Dahlia Delu Belle, which has a virtual run from June 27th through July 4th.

In I Turned It Over, the divine feminine and masculine are held in Isis, one of the oldest deities of magic, transformation and family. This production remaps the Isis and Osiris myth, with Isis being a gender expansive trans masculine deity who is betrayed and let down by his brother-bride Osiris, in turn leaving their divine son Horus to learn how to choose for themselves, the future of the land. Isis is played by both Zeloszelos Marchandt and Mx. Dahlia Delu Belle as Isis M and Isis F. 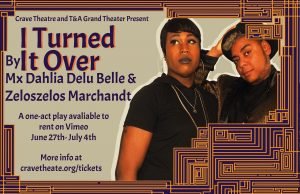