$5
Join us on Thursday, September 15th at 8:00pm at the Clinton Street Theatre (2522 SE Clinton St, Portland, OR 97202) for the WORLD PREMIERE of Ten, Tiny, Talks Resident Artist Lil Mama Ama’s filmed rock opera, “Brain Drain!”
This powerful, psychedelic musical masterpiece explores the Black, Queer experience, grappling with identity, loneliness, and empowerment in the face of adversity.
You won’t want to miss this spectacular piece of art!
==
Amadeus Oladele Ibouratou Mama-Yari, known as lil mama ama, is a multi-instrumentalist, writer and producer. With a focus on producing music, she creates multimedia projects that brings to light struggles and perspectives that are not often seen.
She is a Yoruba transgendered woman who was born in Benin. After moving to the states with her family she started her musical journey playing house shows and bars in Atlanta where she learned new techniques and was inspired by the different artists she met.
After finishing school she moved to Portland and founded the garage rock band The Showgoers. With the Showgoers she released an E.P. “Ephemeral”; an album “Transhistoricity”; and launched a YouTube channel. Currently she is also working on adding a self published web-comic and book to her unique and ever increasing catalogue of works.
The many ups and downs of life has taught her to appreciate the absurdity of it and to use it to motivate her to continue growing, learning and creating. 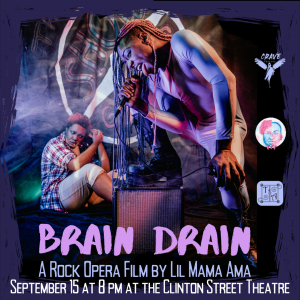